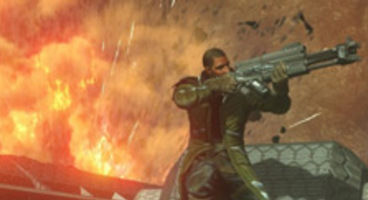 Danny Bilson of THQ, VP of Core Games, has spilled that the yet to be unveiled Red Faction 4 is a "combo" of the old and the new way of things.

The fourth "goes back underground" unlike the topside open world of Guerrilla. To have elements "that have never been" in Red Faction.

Bilson was speaking with CVG in an interview when he starting teasing about the new Red Faction, saying "it's different from the last one but similar." The master of cryptic marketing, clearly. The original game was all about revolution in the mining tunnels.

The second game took it away from the miners and more about just toppling a dictator, with the third game taking fans back to Mars and to fight the oppressive Earth forces.

"It's sort of a combo of the old one and the new one, so it's... I don't want my marketing guy to be pissed at me for giving away too much, but it goes back underground and it's really cool," added Bilson.

Red Faction: Guerrilla was welcomed warmly by the press but still failed to achieve high sales, though THQ feels "that that game has been played by a lot more people than the amount we sold." Piracy, she be a cruel mistress.

"The things that I think were the problem with Guerrilla were not the gameplay but the IP. Being in a dusty environment for a long period of time could get a little monotonous. It's almost simple things like that."

Did you get a kick out of Red Faction: Guerrilla? It had loads of thinks to blow up, and whole building complexes to topple at your fancy. Was that enough? Check our review!