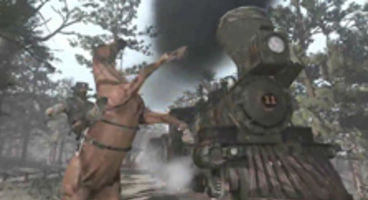 He talks about the marketing focus for RDR being the "iconic image" of John Marston, and "no wine before its time" philosophy for Max Payne.

"We had a sense the title would do well. We were not expecting this kind of audience. The guys at Rockstar have an unmatched track record in creating compelling content. It was also as robust a marketing plan as I have ever seen in my career," Feder told VentureBeat, talking about Red Dead Redemption's success.

"We took a few risks with it. We had a particular point of view on it." For Feder the most prominent part of RDR's ad campaign has been the lead character. "There was a lot of focus on the iconic image of John Marston (the hero of the game). That image is designed to be seared into your mind," noted the Take-Two boss.

"We focused on creating anticipation for the title in a way that hasn’t been done by the company before." Since the game's release a short film has been aired on television created using the in-game engine and selective editing of scenes.

How has the return to Rapture faired? "Even BioShock 2 is profitable for the company and is a great success. The franchise is viable and has a lasting impact on consumers. It was ultimately successful, but not hugely successful," he said.

While BioShock 2 has been received well among critics and sales were high, they soon fell away. "We’re in an entertainment business. The surprise factor is always going to be there. Sometimes they work for you and sometimes they work against you."

Max Payne 3 delayed... again? "We serve no wine before its time. If anything, Red Dead taught us that it is important to give the game the time that it needs. Rushing a game to market has never ever been a successful strategy for anybody in this business."

"We are still digesting the success of Red Dead. We are focused on providing cooperative play for it, which comes out next week. It opens up avenues for us to pursue. It gives the company more flexibility. It’s a game changer for the company," he added.

Were those 6 long years worth the wait for Red Dead Redemption, videogamer? How did BioShock 2 strike you? Does Rockstar's Max Payne 3 have your attention?