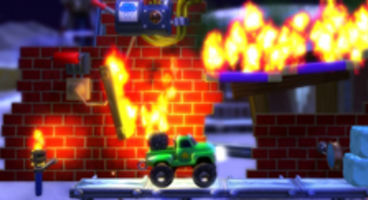 Coming to Xbox Live Arcade and the PlayStation Network this Spring 2011 is Crazy Machines Elements from German publisher dtp Entertainment.

Players must use the four elements to overcome puzzles which "demand some serious brain power". It includes an editor to build our own mental traps.

"In grand Crazy Machines tradition, players must create wacky chain reactions using different parts and accomplish the tasks set out in their mission, from knocking vases over to blowing out candles," blurbs the official press release.

"Inventors can create true chain reaction marvels that obey the laws of physics and not only satisfy the requirements of the task, but also demand some serious brain power, inventiveness and physical out-of-the-box thinking," it continued.

"Crazy Machines also has an editor in which players can build and try out their own crazy machines!" Crazy Machines Elements releases on Xbox 360 and PS3 this Spring.