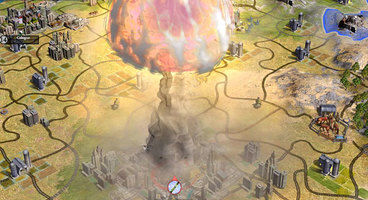 Most of the patch is concerned with gameplay balance tweaking, but if you've been having issues with load times, memory leaks and crashes to Windows, you're in luck - this patch addresses those as well.

Without further ado, here is the laundry list of fixes, tweaks and adjustments in 1.0.1.217:

Invisible Rivers now display correctly. This caused many issues because the player could not see some rivers, like fresh water showing up in strange places, unit movement suddenly shortened, etc.. Basically, there were certain rivers that did not display where forks occurred, etc.

Add combat summary when a city bombards a unit

Embarked units no longer look like they have 500 strength

Taper off benefit of excess food when building settlers

City-States now recognize when a road is connected for their road-connection quest.

Prevent AI from building too many AA units

Avoid cascades of denunciations against a single player. AI now uses its own current friendliness level with a given power to determine how much weight to place on a denunciation against that power.

Declarations of Friendship expire after 50 turns

Added support for policies that provide culture from kills

When you click on a mod in the online browser, you may now use a dropdown to select a previous version.

Added Line Control for modders to use when creating graphs, etc.

Can now use DLC civilizations in multiplayer

Clear up cases where diplomatic status could show as "Friendly" even after that AI power has denounced the player.

Cities must now have three or more tiles in between them (1 more tile than before), unless separated by a sea/coast tile.

Trade routes get bonus gold based on population of capital; formula changed a bit so minimal gold received for hooking up very small cities

Bonus production from excess food (used when building settlers) tapers off if excess is 3 or more.

Allied maritime city states provide 3 food per turn to the capital, not 4

Balance pass on production and maintenance costs throughout the game.

Aqueduct added (entirely new building). 40% of Food is carried over after a new Citizen is born.

Palace boosted to 3 gold and 3 production

Stable gives bonus 1 production for Sheep/Cattle/Horse and can be built with Sheep or Cattle; cost reduced

Ironworks dropped to 8 production (but earlier in tech tree now)

Nuclear and Solar Plants now require Factory but increase to production is now 35% and provide 4 production themselves; these two now mutually exclusive

Forge adds +1 production to each source of Iron

Reduced Colosseum happiness to 3, and reduced maintenance to 2 gold

Reduced Opera House culture to 4, and reduced maintenance to 2 gold

Production bonus from Railroads reduced to 25%

Removed 1 extra gold from Mine on Gems, Gold, Silver, Marble.

Fishing Boats give 1 food, not gold.

Fishing Boats give 1 gold with Compass.

Camps on Deer give production instead of food .

Trading Post gold reduced from 2 to 1 (increases back to 2 when hit Economics).

Lumbermill production increases by 1 with Scientific Theory (moved up from Steam Power).

Mine & Quarry production increases by 1 with Chemistry.

Tradition: Culture border expansion discount in cities placed on Tradition branch opener. Discount increases over the course of the game. Also grants +3 Culture in the capital.

Aristocracy: Wonder bonus reduced by 5% to 20%.

Legalism: Provides a free Culture building in your first 4 cities.

Monarchy: +1 Gold and -1 Unhappiness for every 2 Citizens in your capital.

Liberty: +1 culture per turn in every city.

Collective Rule: Settler production increased by 50%, and a free Settler appears near the capital.

Citizenship: Worker construction rate increased by 25%, and a free Worker appears near the capital.

Representation: Each city you found will increase the Culture cost of Policies by 33% less than normal. Also starts a Golden Age.

Meritocracy: +0.5 Happiness for each city connected to the capital, and a free Great Person of your choice appears near the capital.

Marble boosts wonder production by 20%, down from 25%

Scaled up tech costs throughout the game (slight change for early eras; close to double for Modern)

Move Lumbermills up to Construction

Move Bridge Building back to Engineering

Angkor Wat now provides a 25% discount for the costs (both culture and gold) to gain plots empire-wide.

Reduce Chu-ko-nu from 10 to 9 ranged strength

Doubled culture from kills for Aztecs

Krepost now provides a 25% discount for the costs (both culture and gold) to gain plots in the city.

Adjusted Sheep placement so it is more spread out.