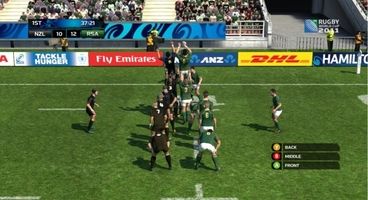 Publisher 505 Games and developer HB Studios have announced that the demo for Rugby World Cup 2011 is now available on Xbox Live Marketplace and will be on PlayStation Network tomorrow, August 3.

The demo features England v. South Africa with the match set in Auckland. In the full version of the game, which launches on August 26, 2011, players will be able to customize the difficulty setting as they pick from the 20 participating teams, and lead their team through the pool phase, and progress to the Final with the opportunity to win the Webb Ellis Cup.

HB Studios promises to viscerally depict national rivalries and venues while simulating player personalities, The game features both solo play and with up to three player local multiplayer. Rugby World Cup 2011 for the first time in the series will allow online gameplay with one-on-one matches on Xbox Live and PSN.

The Rugby World Cup 2011 demo is only available in PAL territories.