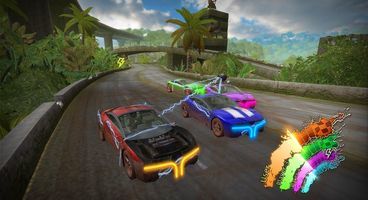 505 games has announced a new digital download game developed by Supersonic for Xbox Live Arcade and PlayStation network, Wrecked: Revenge Revisited. The title is a car combat racing title in the style of Blur or Split/Second: it's all about taking your opponents out by any means possible. Supersonic had developed Mashed for the original Xbox, PlayStation 2 and PC.

“We’re really excited to partner with 505 Games to bring the spiritual successor to Mashed to our existing fan-base and our unique style of racing mayhem to a brand new audience. We want to bring some soul and humour back into the racing genre, and can’t wait for PSN and XBLA consumers to get their hands on Wrecked – Revenge Revisited.”, according to Supersonic's managing director, Pete Williamson.

The game features extensive customization and car loadouts. A single player Championship Mode will offer 24 challenges divided across four disciplines to allow drivers plenty of solo time to hone their skills. Up to four players can tear out against each other in either local or online multiplayer modes across a number of different tracks in distinctive locations.

Wrecked: Revenge Revisited is due later this year.