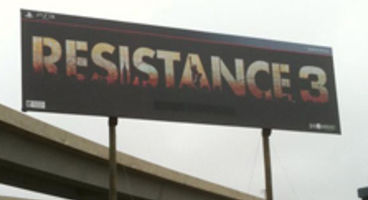 Need a little marketing promotion to brighten your day? Well here's one for you - Resistance 3 is getting a singleplayer demo and it'll be out on disc June 14th.

Why on disc? The demo is bundled with the Blu-ray release of explosion-packed movie Battle: Los Angeles, which hits stores mid-June. Aliens are the connection.

That's right because both of those IPs feature Earth stricken with an alien menace, and because the movie featured a Resistance 3 billboard ad, Hollywood and Sony are pairing the two up a little bit more by offering a singleplayer demo who purchase the film.

Fans get to play the level where a boat is chugging along a river before all heck breaks loose, a level which has been previewed by journalist types before. A multiplayer demo is also planned for Resistance 3 - it's unclear when the SP demo will hit PSN.

Will Battle: Los Angeles be in your shopping basket June 14th?