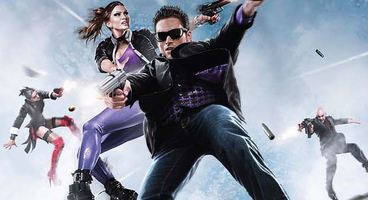 THQ is completely unconcerned with the announcement of Grand Theft Auto V, with no fears that Rockstar's open world game will steal any fire from Volition's own open world title, Saints Row: The Third.

THQ CEO Brian Farrell pointed out that despite being the same genre, Saints Row and Grand Theft Auto have completely different tones.

"GTA is still serious and character driven - a very different experience. Saints Row - if you saw our video today - it shows you all the crazy stuff in the game," stated Farrell. "It's a totally different positioning and if you read the forums it's like 'hey, I love GTA, and I love this game because it's a very different game that knows what it is and is very entertaining.'"

Farrell himself was eager to see yesterday's debut trailer for GTA5. "I went online like everyone to see the GTA trailer. As you point out, it's a high quality trailer and I think it's going to be another fantastic game in the GTA series."

Farrell announced that Saints Row: The Third pre-orders are four times higher than they were for Saints Row 2, and is on pace to sell three million copies. The game will be released for PC, Xbox 360 and PlayStation 3, with an 18th November Euro release date.