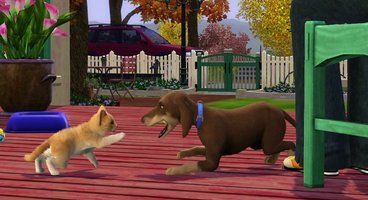 The Sims 3 owners will finally be getting what they've been asking for, as The Sims 3: Pets has been announced by Electronic Arts for the PC, Xbox 360 and PlayStation 3.

Up to this point, the expansions that have been released for The Sims 3 have been mostly underwhelming, offering only new career paths or new interactions. The Sims 3: Pets finally adds the ability to raise pets, which was something that players enjoyed a Sims generation ago with The Sims 2: Pets.

According to the press release, The Sims 3: Pets will allow players to be able to create, customize and control over a hundred different kinds of cats and dogs like the Australian Shepherd and the Maine Coon, and can breed and share them with friends providing endless possibilities to create new and exciting breeds. The PC version will also allow players to create, customize and play as horses. Players will be able to use their horses as a form of transportation to get around town and also to raise and train them with activities like racing or jumping hurdles.

The PC version will be an expansion for The Sims 3, while the console versions will be a standalone game, where players will unlock achievements by solving mysteries around town. If that weren't enough, the Xbox 360 version is Kinect enabled, allowing players to direct their Sims and their pets using voice commands.

The Sims 3: Pets also comes with preorder bonuses. Preordering the standalone console game will add new breeds such as a dog tiger retriever, a dog panda chow, a cat skunk birman as well as other additional pets. PC players will get the exclusive pet store where they’ll be able to meet and mingle with neighborhood Sims and get new and unique objects.

Check out the official trailer in the video below.