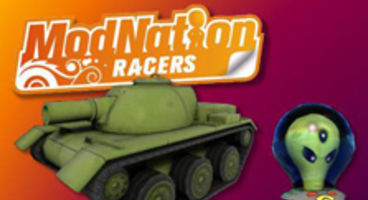 Get ready for the constant stream of ModNation Racers DLC to keep on gushing out San Diego Studios' door and onto the PlayStation Network.

Today on the US PSN is the Alien Invasion Mini Theme, crammed with all things UFO and galactic. The 12th gets gladiatorial, and 19th medieval.

"We expect to see some flat-out ridiculous tracks using this mini-theme," posted San Diego Studios' Mark Wilson on the US PlayStation.Blog. He was talking up the newly released Alien Invasion Mini Theme which arrives with loads of track theme parts.

Next week on the 12th the Gladiator Parts Pack will be released adding that Roman feeling as you put together some old empire tracks. Then the following week the Medieval Mini Theme arrives with everything a King and Kingdom need to spruce up their land.

The Alien Invasion and Medieval Mini Theme both cost $6.99 while the Gladiator Parts Pack goes for $4.99. Do you enjoy a good run on ModNation Racers?