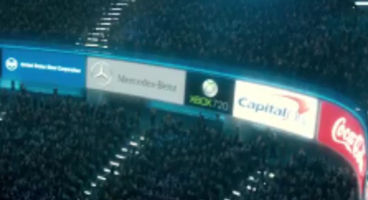 The new robot boxing film starring Hugh Jackman, Real Steel, included some real corporate branding for its boxing stadium and among them was 'Xbox 720'.

It seems Microsoft cheekily signed off on the 'product of the future'. Speculation points to E3 2012 for a possible unveiling of their next-gen Xbox console.

The tongue-in-cheek logo for the next possible iteration of the Xbox platform was spotted among one of Red Steel's trailers by NeoGAF. The movie trailer (below) with the logo can be seen clearly at the 0.47 mark if you're quick enough to freeze it.

The film is set in the year 2020 so the 'Xbox 720' will be around for at least 8 years according to the Real Steel prediction of corporate products and robot boxing. Do you believe Microsoft will be announcing the next Xbox console at E3 in 2012?