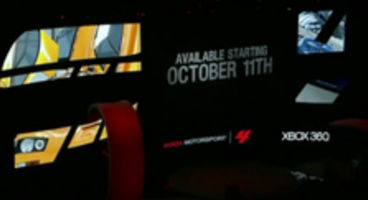 The end of an E3 2011 trailer for Turn 10's Forza Motorsport 4 revealed that Microsoft has October 11th marked in their calendar for the racer's retail shelf debut.

Community car clubs are also in for better online social interaction, as well as a 'rivals mode' and an 'epic world tour'. It’s the first time 16-player online multiplayer has been included in the Forza Motorsport series. The Top Gear test track was spotted too.