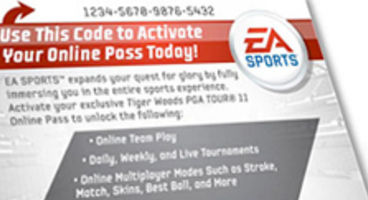 EA regard it as "found revenue" from those who previously "consumed bandwidth for free" from second-hand games. It began with Tiger Woods last year.

"The revenues we derive from that haven't been dramatic," said EA CFO Eric Brown at the Citi 2011 Tech Conference. "I'd say they're in the $10-$15 million range since we initiated the program." Since the introduction of Online Pass, others have developed their own.

2010's Tiger Woods PGA Tour Golf was the first title to include the system which sees online services cut off from second-hand copies until the owner pays a one-off fee. New copies include a code for multiplayer at no charge, to encourage mint copy sales.