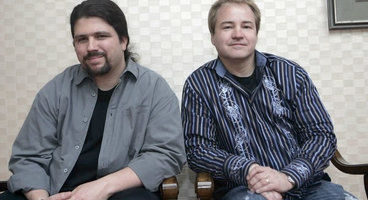 It seems that ex-Infinity Ward founders Vince Zampella and Jason West's first game under their new banner Respawn Entertainment will be a sci-fi shooter, and will aim at competing with Gears of War and Halo.

EA Games Label president Frank Gibeau spilled the beans at a press briefing, stating, "In general we're going to continue to follow our rotation strategy of giving studios a full two-year cycle to get a game built and polished to maximum quality, but we're going to do it in a way that allows us to maximize technology investments like Frostbite 2, the online service models that we're doing... we're going to be able to trade team knowledge and increase the quality of the products year in, year out."

"The idea is to have that rotation happen with Battlefield and Medal of Honor and keep it fresh so you don't burn the teams down or over-annualize the product lines.

"Titles like Respawn - and I think the Insomniac title is a little bit more of an action game than a pure shooter - we'll sprinkle those in where we see opportunistic gaps, either in a release schedule or in a genre standpoint. Those typically are more sci-fi oriented shooters, where as the Medal of Honor and Battlefield brands are obviously more modern military oriented.

"So it allows us to pick and choose the best of the sci-fi shooters. It allows us to compete with things like Gears and Halo and put them on places in our release calendar where they're not cannibalistic to the core business and that's the essential strategy going forward."

As if having to make a game that is as much as a cash cow as the Call of Duty license is right now is difficult enough, but the impossibly high bar is set even higher by asking the game to try to match Gears and Halo.