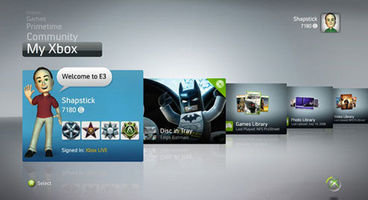 Microsoft has revealed some of the features that will be appearing in the Xbox 360's yearly dashboard update, and it will focus on three major areas. The publisher says that the update will be tweaking performance, usability and search, and will have a user interface similar to the upcoming Windows 8 UI.

The new user interface can either be guided using the controller or with voice recognition through the Kinect Sensor. Users can select different options/items with the gamepad as normal, or the user can simply say "Games", "Zune Marketplace" or "Facebook" and the Xbox will jump right to the appropriate section. Bing will also be incorporated into the dashboard across the Marketplace spectrum.

The improved search engine will also benefit the sadly ignored Xbox Indie Games marketplace. The dashboard will reputedly help gamers find indie games a lot easier than before. According to Microsoft, even the most obscure games will be reachable through the search engine.

As for Achievements, they'll now be postable to Facebook profiles, while the Xbox will now send game requests to friends via Facebook as well.