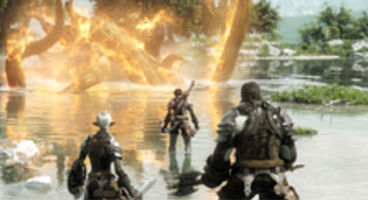 Newly installed director Naoki Yoshida of Final Fantasy XIV Online reveals in an interview that his favourite in the series is FFVII for its "impact you never forget."

It's that kind of atmosphere that FFXIV needs to survive. Eorzea needs to feel it has 'untold wonder' to be a 'true' Final Fantasy in boss Yoshida-san's eyes.

"As we stated in the 'New Development Team Policy' on the Lodestone," says Yoshida-san, "Square Enix, as a whole, will work vigorously, now more than ever, to deliver a satisfying experience for all our customers." FFXIV is experiencing a massive overhaul in UI.

The MMO is in disarray admits the game director but it's also suffering the universal demands of today's MMO game. "People want loads of content right off the bat, and third-party add-ons are a given now," he said. "It’s a tough situation for new games."

Before Square launches the PlayStation 3 version of FFXIV they must succeed in "regaining customer trust", and Yoshida-san is keeping a release date off the table as he doesn't want to break any promises but "they will never give up on it."

"Final Fantasy VII," was his reply to his favourite in the series. "Even talking with fans from North America and Europe, you hear how it leaves an impact you never forget." Naoki Yoshida was speaking in an interview with 4gamer, which has been translated.

Have you been playing Final Fantasy XIV Online? Does it need more 'wonder'?