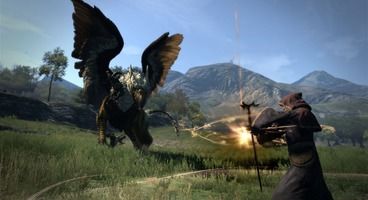 The mage.
The first three classes of Dragon’s Dogma, Capcom’s upcoming action RPG have been revealed by Capcom. The classes include the fighter, the strider, and the mage.

Fighters: Equipped with a sword and armor, fighters are skilled at close range combat. Through intensive training, fighters tempered their bodies into deadly weapons.

Striders: This class is comprised of speedy and quick-witted characters agile enough to leap around gigantic monsters. In battle, they prefer to keep their distance by using a bow to fight.

Mages: Masters of the mysterious arts, mages use magic to fight. Players will need to adapt to situations and use different spells depending on what kinds of monsters are in the area.

These are only three of the classes in the game, and more classes will be revealed over the next few weeks. Dragon’s Dogma is due to be released in early 2012 on PlayStation 3 and Xbox 360.