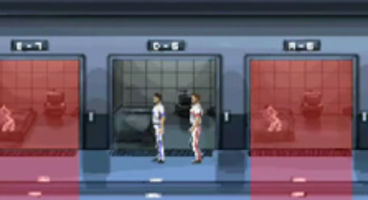 The "bleak future" run by organised crime in Gemini Rue is out on PC February 24th, announces Wadjet Eye Games. It's a retro sci-fi adventure.

This point 'n' click tale involves two characters, an ex-assassin and an amnesia patient, as they go ruffle some galactic feathers. It won an Indie award.

Under the original name of 'Boryokudan Rue' the indie developed adventure was one of the 2010 Independent Games Festival Student Showcase Winners. It's a "tale of science-fiction mixed with film-noir, following two separate, while interweaving stories."

"It is a full-length game spanning over 80 rooms with hand-painted backgrounds, dozens of characters with animation, a neo-noir soundtrack by Nathan Allen Pinard, and featuring 4-8 hours of gameplay," continued the blurb.

Wadjet Eye Games snapped it up and now it releases on PC late next month. "When Josh first showed us Gemini Rue, we knew we had something very special on our hands,” says Dave Gilbert, Wadjet Eye Games' founder.

"It’s the type of game that keeps you on the edge of your seat. We played until we couldn’t keep our eyes open, then eagerly started playing again when we woke up. Working with Josh to finish up the game has been a blast, and we’re excited to finally share it with the world!”

The game is available for downloadable pre-order and as a limited edition disc on the official website. Check out the Gemini Rue trailer below.