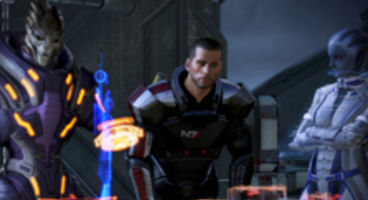 Rumour finally gave way to fact as multiplayer has been confirmed for Mass Effect 3. It's a four-player co-op survival mode of sorts, fighting Cerberus.

More details have surfaced for the online action, such as a level cap of 20, you earn War Assets helping single player Shephard, and gear is upgradeable.

From the overview of the multiplayer, it looks like BioWare has done their homework and they've made sure we know that the 'best' ending for Mass Effect 3 is achievable without going online. It all comes down to War Assets, an in-game currency.

Apparently the studio has been planning a multiplayer component since the original Mass Effect, but only until Mass Effect 3 have they felt comfortable enough to include it. Essentially the multiplayer is four-player co-op survival stages against Cerberus waves.

A 'Galaxy at War' mode provides the game's reward system, as well as a suite for character progression and customisation. All our progress in the multiplayer earns us 'War Assets' which can be spent in the single player campaign to fight the Reaper invasion.

We spend these War Assets on preparing the Galactic community to fight back by buying fleets, allies or even installations. There's enough to do in the single player to earn War Assets to ensure we get the best possible ending without needing co-op.

Check out the summary below of what OXM's December issue reveals about Mass Effect 3's multiplayer, courtesy of StickSkills.

• Mass Effect 3 multiplayer has been planned since the original Mass Effect.

• The multiplayer experience boils down to a four player co-op survival style mode that lets you fight increasingly difficult waves of Cerberus foes.

• The enemies you’ll encounter can range from your most basic foot soldier to “assassin-like Phantoms and even the hulking metal titan-esque Atlas mechs”.

• Each “stage” allows you to go up against eleven waves that must be finished in order to complete that section. The mode reminds quite a few of Gears of War’s horde mode, allowing you to net experience points regardless if you finish the wave alive or not.

• The “Galaxy at War” mode gives you a reward system, character-progression suite, and a “stake in the larger battle that’s taking place in your single-player campaign.

• How you perform in the multiplayer missions has a result on your success in the main storyline as Shepard, but only if you want it to.

• Everything you do in the singleplayer campaign will earn you in-game currency called “War Assets”. War Assets allow you to purchase things such as allies, friendly fleets, or even a facility such as a radar station.

• Successfully completing various side-missions, larger plot points, and destroying your enemies will net you the War Assets needed to purchase the upgrades.

• “The more you play and build up your multiplayer characters to survive increasingly tough odds, the more power and influence your single-player Shepard will wield by the time the endgame comes based on the amount of War Assets earned.”

• If you’re one of those gamers that loves to complete every piece of a game, then you’re in luck. By doing enough in the singleplayer campaign, you will be able to earn enough War Assets, you won’t have to participate in the “galactic war”.

• While you’re going through a variety of locations in singleplayer, you’ll see first-hand how the war has hit different colonies. Galaxy at War mode follows suit, allowing your individual character and team to take up arms to defend these various locations. Your squad is under the command of the Alliance Navy officer Admiral Hackett, making his return from each game. Fighting in each various area will and successfully defending it will “win for interstellar freedom”.

• As you complete each area or defend newly freed areas, your progress will be detailed on a color-coded map that you’ll be able to view while you’re in the game or a few other platforms. iOS devices, Facebook, and more will allow these to be viewable and have their own “unique hooks” into the Galaxy at War mode.

• In the build described in the magazine article, four character classes were mentioned: Soldier, Infiltrator, Engineer, and Sentinel. The final version of the game has been confirmed to have more classes than this to initially choose from, as well as unlockables.

• Each class that you select from will allow you to select from a variety of races. Ranging from the likes of a Krogan to a Drell, you’ll have a good bit of variety to choose from. Yes, a Drell, the same race as Thane from Mass Effect 2 (we’re excited).

• As you can probably figure, each class will allow you to possess “specific abilities” as well as the ability to upgrade a few. Krogan soldiers were described as being able to use a charge attack to known down enemies, along with Soldiers being able to use the Omni-blade for a few rather lethal attacks. For those wondering, you’ll also be able to choose your gender when choosing any class.

• While you can stockpile characters, the experience you earn only records for that character’s specific class. Once you level up, you’ll be able to assign those earned points to different abilities.

• Before heading into action, you can select your weapon & biotic-powers from the available options.

• Armor and weaponry can be upgraded to your individual tastes.

• Points can and will be earned for assists, kills, and other similar actions during multiplayer.

• When an ally goes down, you’ll have a limited amount of time to revive them. The article mentioned “spamming the A button” while down to increase the amount of time before bleeding out.

• Along with killing your enemies, mission objectives will be sprinkled here and there. Retrieving data packets around the map and protecting an ally while they hack a series of terminals were a few of the described mission objectives.