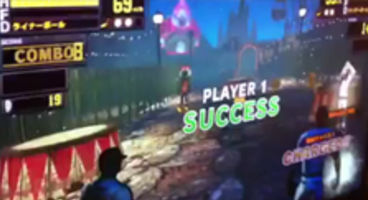 At the Tokyo Game Show studio Grasshopper Manufacture has revealed their title codenamed Project D for Kinect - they're calling it Diabolical Pitch.

It's baseball with a twist - we use pitched balls to defeat hordes, and the bat helps too. It features co-op as a partner was seen revived and used to power-up.

A clip showed that bumping fists with your co-op buddy powered-up a fireball that ripped through the waves of foes. Microsoft Japan's Richard Newman hailed it as core Kinect game that has been cooking for over a year.

Diabolical Pitch releases exclusively on Xbox 360 later this year. Kotaku managed to snag some footage of the game at the Tokyo Game Show, which you can see below.