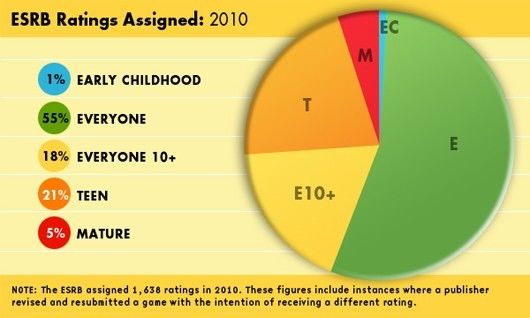 According to Joystiq: These statistics haven’t changed much over the past few years — actually, Mature games actually fell by one percent year-over-year. So, you know, if anyone tries to convince you that games are solely designed to mold everyday citizens into unfeeling murderbots, feel free to drop that knowledge on them.

While only 5% of the games were M-rated, however, a large portion of them probably won critical acclaim and videogame industry awards. After all, most serious gamers would rather play Red Dead Redemption than Nintendogs.

Regardless, while a good percentage of films that are released are R-rated, only a fraction of games are M-rated, which sort of once again blasts the concept that videogames are by in large a bunch of slasher movies with tits attached. Take that, Australia.