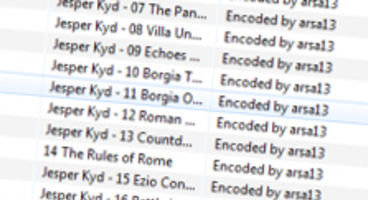 Ubisoft has egg on its face after a user noticed the supplied soundtrack with the Assassin's Creed: Brotherhood Digital Deluxe Edition isn't so 'official'.

It appears Ubi encoded the soundtracks from illegal sources, i.e. a pirate torrent. The note 'encoded by arsa13' was spotted. A publisher's revenge?

The Digital Deluxe copy of PC Assassin's Creed: Brotherhood includes the official soundtrack to the game but Ubisoft hasn't sourced them from their own studios but rather pinched them from 'pirates' who extracted the music from the game.

This wouldn't be the first time a studio has used unofficial content for their official releases - Rockstar Games used a cracked executable for PC Max Payne. Assassin's Creed: Brotherhood finally releases on PC this week.