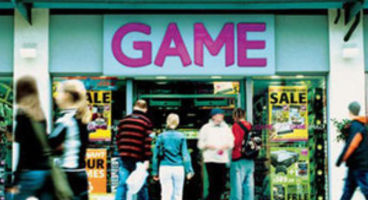 The drop in sales and revenue for the GAME Group in the UK, "despite strong title launches," is because of the "extraordinary" condition of the economy around the world.

The video games market overall "remains very challenging," with less customer "footfall and basket sizes" in shops. Sales were down 10.6 percent for the 41 weeks leading to November 12th.

Online sales via the GAME website have remained stable for the retailer, and 28 percent of total sales came from trade-ins, which have a 40 percent margin. GAME's fiscal forecast is lowered.

The figures released from GAME include day one sales of Modern Warfare 3. "This is ahead of the overall video games market, which was down 12.3 per cent in the same period," said the company.

"Major software titles are launching in line with first week expectations, but are then seeing a quicker tail-off than historically experienced," GAME said. "Customer footfall and basket sizes are down reflecting wider consumer uncertainty." This year 37 stores have been closed around the UK.

GAME is attempting to fight off the decline in retail with greater digital offerings, and launched the GAMEwallet in October. "The overall video games market remains very challenging, despite strong title launches, and our guidance today reflects the extraordinary economic times in which we are operating," said boss Ian Shepherd.

"Game has outperformed the market, reinforcing our position as market leader, and I am hugely proud of our teams. They remain focussed on delivering our strategy, controlling costs and driving operational cashflow, and we remain well placed to benefit in the medium term both from the next console cycle and the growth in digital and social gaming."

How well this year's Christmas period for GAME went will be reported January 11th.