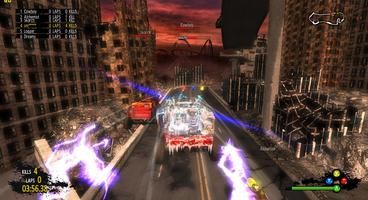 The game will be released on Steam for the budget price of $9.99 USD, and includes the following features:

* Weapons – All of the vehicles have three unique and powerful abilities that they can use to severely damage opposition vehicles: one front attack, a side attack and a rear attack.

* Environments – The P.A.M. tracks will be able to give you numerous options while racing as well as create intense areas for the all important collisions.

* Various paths around certain areas of the tracks.

* Funnel areas were players are forced to drive in close quarters with other vehicles.

* Online Leader Boards – Every kill, every race and every result will be recorded and uploaded to online leader boards for bragging rights and fuelled competition.

Check out the trailer below.