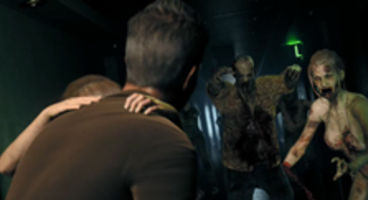 Techland's headline making trailer for Dead Island, an open-world zombie survivor, has definitely got itself on Valve's undead radar - they want more.

It was a "neat filmic thing" to have its trailer in reverse, although it gave a "weird feeling" to see violence against a (zombie) child, it's "unpleasant in a way".

"I think it's great, but I just had a baby this year and I just had a weird feeling," said fellow Valve scribe Erik Wolpaw. "The violence towards kids is unpleasant. I'm not offended by it, but it's unpleasant in a way that makes it difficult to watch."

"But it looks cool. An open world zombie game would be awesome." Dead Island has RPG elements like character classes, weapon customisation and skill development. It's entirely open-world with scarce ammunition - basically Dead Rising with the end gone.

There's scepticism whether the very talked about trailer represents what we can expect to experience within the game itself. "That's what I'm curious about as well," said Faliszek. "But I'll tell you what, it brought me in and I want to know more about the game."

"Telling it in reverse was a neat filmic thing. Coming out of it, I still don't know anything about the game, but as a way to reintroduce... hey guys, remember this game we talked about three years ago? Here it is," added Wolpaw.

"It was hardcore. It'll be interesting to see what happens in the game." Dead Island announced back in 2007 and was assumed to be suffering setbacks but now Techland are bursting onto the scene with it once again. Were they waiting on Left 4 Dead?

Dead Island is in development for Xbox 360, PS3 and PC.