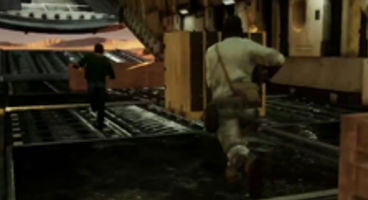 Naughty Dog "don't do" single player co-op content because they have a "very defined story for Drake," and it would practically balloon into a full game.

The studio want us to feel like we're "on that mission with Drake," so any co-op DLC would need to be huge as a result - they "tend to do things very big."

Online co-op returns with Uncharted 3 but it takes a much less serious tone than the single player campaign does with Nathan Drake.

"The reason we tend not to do, or don’t do, single-player co-op content is because we’re telling this very defined story for Drake, and we want you to really feel like you’re on that mission with Drake," explained Naughty Dog. Split-screen co-op is in.

"You feel like Drake does as you’re going throughout it, and so when we start looking at online stuff or co-op stuff to do, especially DLC, it’s like we can either make some downloadable content that’s six hours long and basically a full game, or we could move onto the next game and produce that," they continued.

"We have a hard time going small! As a studio we tend to do things very big."

"But there is a reason we don’t do it from the beginning, because up until this point the stories that we’re trying to tell have been Drake-centric and how Drake goes through this world and the things you learn about him and we want to ensure it still feels like that, so that’s why we have co-op being this alternate-reality, where we get away with more."

They added: "Co-op is different from single player, it just has a totally different vibe to it when you’re playing with somebody else; you can lose that serious nature of what we do in a lot of cases, especially with co-op, so we want to be very careful with that."

"This time around we do offer an even more expansive amount of co-op content, and actually this time, all the story of it, all the little chapters tie in together, and I think people will be really excited about that."