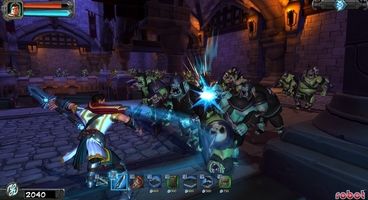 Robot Entertainment has announced the official release dates for the PC and Xbox Live Arcade versions of their upcoming melding of tower defense strategy and third person shooter genres, Orcs Must Die!.

“The slaying hour is nigh upon us,” said Patrick Hudson, CEO of Robot Entertainment. “We can no longer restrain the enemy at the gate. We will soon turn the rift defense over to Xbox and PC gamers to beat back the mob and save the Order!”

The basic gameplay of Orcs Must Die! is familiar to all tower defense afficionados: a horde of enemies are trying to invade, and the player must kill all - or at least almost all - of them before they enter the magic portal. What makes Orcs Must Die! different is that your avatar is a controllable character in third person perspective and can actively attack orcs himself, killing stragglers that manage to get past the traps he's laid down.

The other delightful aspect is that the entire game is done with tongue firmly planted in cheek, as the gruesome deaths are rendered as cartoonish buffoonery, so players can "hack, launch, flatten, gibletize, and incinerate an endless army of filthy orcs and their vile allies" with no feelings of remorse. All of this is underscored by an addictive strategy game that requires cunning use of traps, as different enemies must be dealt with in different ways.

• Play as the War Mage and defend 24 fortresses from an enraged mob of orcs and 11 other villainous monsters.

• Choose from a selection of 6 weapons and magic spells and 17 traps that hack, launch, flatten, gibletize, and incinerate your enemies.

• Upgrade your traps, spells and weapons to cater the game to your personal play style.

• Cleverly combine traps and spells for higher scores on the leaderboards.

• Expertly wield your wits and your weapons through the story-driven campaign and unlock a brutal “Nightmare” campaign. 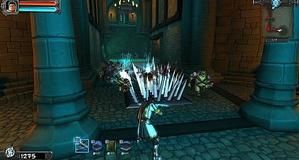