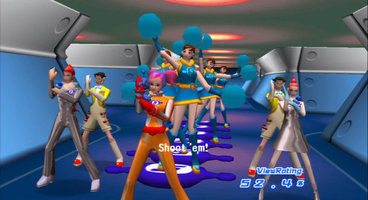 Sega has announced that two remakes of classic Dreamcast games, Space Channel 5 Part 2 and Sega Bass Fishing, will be hitting Xbox Live Arcade on October 5 and PlayStation Network on October 4.

Space Channel 5 Part 2 is the infectious but hard rhythm game that took the concept of the electronic game Simon and gave it oodles of campiness. Players took on the role of sexy, bubbly newscaster of the future Ulala, who saved the universe and rescued President Peace with her stylistic dance moves.

Meanwhile, Sega Bass Fishing was a surprise hit on the Dreamcast, and one of the most realistic fishing simulators ever released on console, as fish behaved just like real fish do, and required the player to plan his strategy in order to catch the really big large mouthed bass.

Both games are expected to run 800 Microsoft Points. Both Sega Bass Fishing and Space Channel 5 Part 2 are already part of a 4 game compilation on the 360, Dreamcast Collection.