22 March 2011 | By Jonah A. Falcon
Microsoft has sprung another leak, arguably more intriguing than the internal video showing the future of PC gaming. This one ostensibly reveals the planned release date of the next Microsoft console: 2015.

The web portfolio of Ben Peterson features a "confidential project" at Microsoft (how confidential can it be if it's on a public resume, though?) that states: Microsoft Xbox: Confidential / Collaboration with Microsoft’s IEB Design group investigating future user experiences and hardware for 2015. *Work samples only permissible in person.* (March 2011) 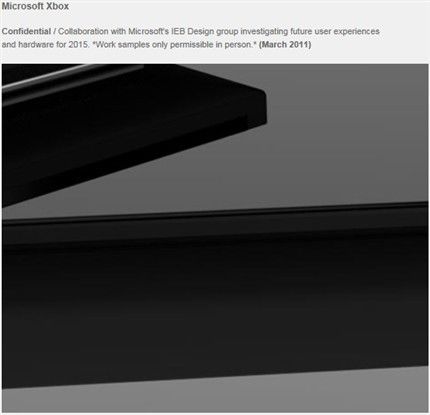 The blurb is accompanied by a zoomed-in look at two mysterious black hardware devices. While they could just be new Xbox 360 peripherals, the fact that the release date is 2015 makes it more likely to be associated with the next Microsoft console, because by then, the Xbox 360 will be 10 years old, which would be ancient by console standards. It's doubtful that Microsoft will ride the 360 that long.

This evidence becomes even more compelling with the recent ads posted by Microsoft for hardware engineers for "defining and delivering next generation console architectures from conception through implementation."