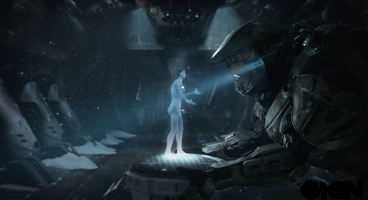 John-117, aka Master Chief, isn't the quite the same Master Chief you've known over the course of the Halo trilogy. Fans have noticed subtle changes in his armor and personality in the Halo 4 trailer, and 343 Industries has confirmed it.

"There's some story behind his new look," 343 Industries and Halo guru studio boss Frank O'Connor explained. "There are specific reasons why he looks the way he does and why some of his behaviours have changed. We'll see in good time." Could it be Master Chief is psychologically scarred from the events of Halo: Combat Evolved through Halo 3, despite his stoic demeanor throughout the trilogy?

Halo 4 takes place a long time after Halo 3, and according to O'Connor, "A lot of things have changed in that intervening period" during which Master Chief's been in hypersleep, floating around the mysterious planet some have theorized was Onyx, or a Forerunner world.

Microsoft Games Studios corporate vice-president Phil Spencer has been reassuring fans that the new game "will live up to what fans fell in love with". One wonders - and maybe hopes - if Halo 4 will finally connect the Halo universe with the Marathon mythos at last.