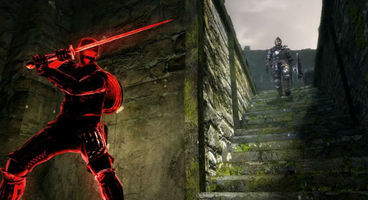 This is a Black Phantom. Be afraid.
From Software, the developers of the brutal action game Dark Souls, has a nasty surprise for players who get their hands on legitimate copies of the game before the street date.

One of the neat features Dark Souls has is the ability to let players invade each other's game world. It is this feature that becomes a sharp sword as it will allow From Software to have invincible monsters invade players worlds, maximum level Black Phantoms.

These are no ordinary Black Phantoms however. These creatures are level 145 monsters with 1900 hit points and all of their abilities set to maximum. In order words, they're impossible to defeat. So, unless you're a masochist who enjoys getting pummeled and decimated by unbeatable monsters, it'll be a good idea to wait for the game's regular release date before playing.

Dark Souls' street date is October 4, so you have been warned.