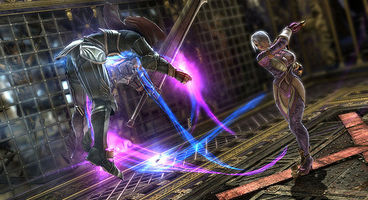 Soul Calibur producer Hisaharu Tago promised, "We promise every player will feel extremely excited and satisfied when they defeat an opponent by successfully using the new Quick Move high-speed evasion from attacks, sharp combos in sequence, and brilliant special moves causing lots of damage" in a post on the PlayStation US Blog.

But more importantly, he unveiled three of the fighters that will be in the game, one of which, of course, is the iconic Ivy. The other two are completely new characters.

On new character Natsu: "She is an apprentice of Taki, a character that has been in SoulCalibur since the beginning. I think it is better to show Natsu’s charm in motion and not by talking about her appearance — please look forward to gameplay videos soon. SCV’s sharper and faster battle system really compliments Natsu’s ninja speed and evasive maneuvers. After you use Natsu, you can discard any prejudice you may have that she is simply a replacement for Taki."

And on the other new character Z.W.E.I.: "The biggest surprise with Z.W.E.I. is the short sword in his hand is not his main method of attack. His inclusion is making SoulCalibur’s “Weapon-based Fighting Game” style step into all-new territory. Please watch the Comic-Con trailer on Monday, July 25th and imagine how his fighting style will play out. The clue is Z.W.E.I. means “two” in German. Does that mean there must be a “one” as well?"

Let us know if you're excited for Soul Calibur V.