BlizzCon 2011: "Literally, there's three of us" on console Diablo III 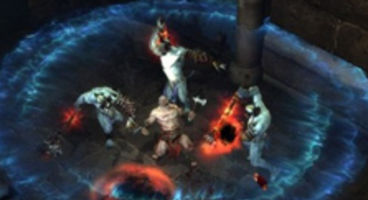 Action RPG newcomer Diablo III, still in its beta phase for PC, is being developed for the home consoles. Right now it's got just three people on it.

Blizzard are "trying to build the best" team for its console ambitions as they're "really serious about going back" to them. No public beta is planned.

"We're not announcing anything because, literally, there's three of us on the team right now ... but that's what we're trying to do... We're trying to build the best console team at Blizzard," said Blizzard's Josh Mosquiera, Diablo III's Lead Console Designer.

"Blizzard is really serious about going back to the console." Development has either just begun or will do soon on the console versions of Diablo III. Right now the PC version has entered a closed beta period and the public won't be getting a taste until retail.

"We're doing it in waves, so we'll keep adding people. The beta will be going for some time; we're going to be patching it, supporting it, and adding new stuff to it, as well," added Lead Content Developer, Kevin Martens.

Diablo III has been in the works for 7 years. Are you excited for the action RPG franchises' return? It focuses on "action storytelling" more with Blizzard having learnt a number of things from unfolding stories in World of Warcraft.