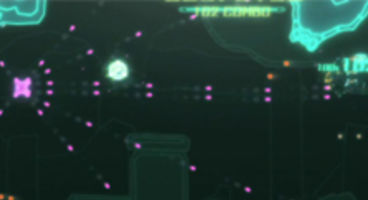 This week PixelJunk SideScroller will be gracing our European PlayStation Network as it releases for some "really, really good old school fun" from Q-Games.

SideScroller uses the same engine as the studio's two Shooter titles, but it's a "single-stick controlled" game. Q-Games have even given us some back-story.

"Back in the day I used to love games such as R-Type and Darius, and going even further back there were games such as Scramble and Defender that inspired me as a child," posted Q-Games president Dylan Cuthbert on the EU PlayStation.Blog.

"So... we decided to dip our toes in and see what PixelJunk could bring to the side-scroller world." There are a handful of enemies from Shooter that have been "re-imagined" for SideScroller he revealed.

"The back-story of the game is that SideScroller is the game the pilot of PixelJunk Shooter is playing on his old computer console in his ship on the way home to Earth after the ending of Shooter 2. This explains the cool “retro” look we have designed with the curved CRT (cathode ray tube) screen and the monochrome look of the interface."

The PixelJunk series just keeps on growing. "Oh and did I mention, the bosses are AWESOME! Maybe I should mention that again...", teased Cuthbert. Check out the newly released trailer for PixelJunk SideScroller below, which releases October 26th.