25 November 2011 | By Jonah A. Falcon
Update: The woman has turned herself in. According to the Associated Press, "'Last night at 8:30 the suspect involved in the pepper spray incident at the Porter Ranch Walmart turned herself in,' police Sgt. Jose Valle said Saturday. She immediately invoked her right against self-incrimination, however, and refused to discuss the incident further." 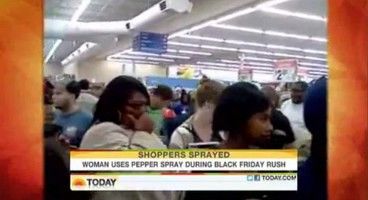 Original: In the United States, the day after Thanksgiving is called "Black Friday", a term that originated from retailers knowing their profit margin would go from being in the red (loss) to the black (gain). In recent years, however, Black Friday has become synonymous with greed and danger.

In the past few years, people have perished from being trampled in the rush to enter a large retail chain (usually Walmart) to be the first to buy the cheapest holiday gifts.

This year went to a new level, as a woman in Los Angeles decided to use pepper spray on other shoppers at a WalMart to purchase an Xbox 360 along with accessories.

According to the L.A. Times, "The woman apparently sought to purchase an Xbox video game console and used the spray to clear out other shoppers. About 20 customers, including children, were hurt in the Thursday night incident, which police officials called 'shopping rage.' Shoppers complained of minor skin and eye irritation and sore throats."

The Los Angeles Police Dept. will be looking at video surveillance and receipts to identify the woman responsible.