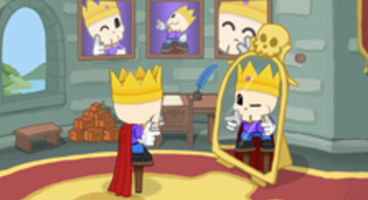 It adds the Shiny Stone Cup made up of four new race levels with the new Castle environment. We get Kitten, Viking, Spaceman and Barney.

Here are the four added characters:

KITTEN – A descendant from the legendary half-cat, half-skull and half-awesome Raskulls of the Faraway Mountains, Kitten is a cute yet deadly addition to the cast. Why deadly? Ask Little Billy Bobskull, the crippled boy in the Extensive Bite n’ Scratch ward at Raskulls General.

VIKING – One of King’s past rivals, Viking likes to pillage, loot and drink with the best of them. On the other hand, he’s big into haberdashery. Fine men’s suit craftsmanship does not a nice Raskull make.

SPACEMAN – Spaceman, I always wanted you to go | into space, man.

BARNEY – A Pirat minion of Captain J. Turncoat, Barney has the tendency to lose his pants and ice-cream money. As a mindless thug, he’s sub-par. As a potential hat rack or paperweight, he’s not bad at all.

As an extra treat for fans the studio is also giving away for free the complete original Raskulls soundtrack. "This is a free download via Bandcamp to say thanks for all the awesome support fans have shown Raskulls since release!" they announced.