Levine dislikes 'auteur' label, "sounds like you do everything" 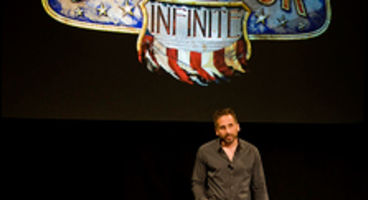 Irrational Games' Ken Levine declares BioShock Infinite "my game," but he doesn't like being labelled its grand auteur, he believes "more in editorship."

The studio boss loves getting to sit down with his staff to "chat with each other," but in the end it's "gotta be my decision." Levine wants film 'true to BioShock'.

The Irrational founder described his role as like an "editor of a magazine... but I'm also a writer for the magazine," and he doesn't like being thought of as the single driving force behind the BioShock experience.

"I believe more in editorship. Auteur sounds like you do everything," said Levine.

He is absolutely its creative lead: "This is my game. And I love the fact that we sit down and chat with each other, but at the end of the day... this thing's gotta be my decision."

A film of the underwater antics of Rapture is in the works, so what role is Ken Levine playing in its production? "If I were to make a game that was based on somebody else's franchise, you need somebody there who's going to say, 'This is true to the franchise, this isn't true to the franchise.' So that was more my role in the film," explained the developer.

He believes the project is in safe hands: "Unless for some reason I decided I'm gonna go be a screenwriter or something, but then that's a particular job and I have a different responsibility there, which is writing a script instead of the guy who protects the franchise and makes sure the film is true to the franchise." It doesn't get his direct supervision.