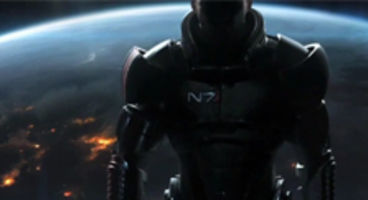 During Mass Effect 2's development BioWare had "a few prototypes" where HUD information was in the game world, like in EA's Dead Space 2.

However it didn't work so well when in cover - if they'd have "simplified" Shepard's health it "might have been easier". They're still "investigating ways" to do it.

"We actually had the exact same thought during ME2 development and did a few prototypes of a health and shield indicator in world on Shepard's armour. The end result was not as great as we'd hoped...," posted BioWare's Brenon Holmes.

"It was ok when Shepard was out of cover, like in the image you linked. The issues started to crop up once you popped into cover, with the way that the camera was positioned and with Shepard's orientation changing we had to do some fairly crazy stuff to get the health indicator to display in a reasonable position."

"Even then it ended up being rather confusing to reference when you were in the middle of a fight. I think if we'd simplified our health system so we only had one meter or bar it might have been easier to represent it on the armour (like on Isaac's back in DS)."

"All that said, we're still really interested in trying to move information into the world. That's one of the things that I love about Dead Space; the interface... it feels really immersive. I just want to touch the hell out of those buttons."

"So we are still investigating ways of putting some of our HUD elements into the environment... we'll see what we end up with,"

Mass Effect 3 releases on Xbox 360, PS3 and PC later this year. The last piece of Mass Effect 2 DLC - The Arrival - is due out this week and bridges events.