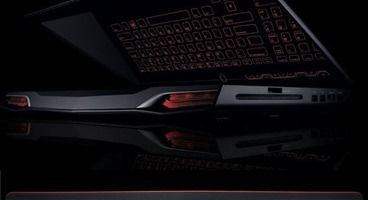 Laptops as serious gaming rigs just got a burst of adrenaline as NVidia has announced that Origin and Alienware laptops would be packing the company's fastest, hottest GPU, the NVidia GTX 580M.

One of the biggest issues with laptop graphics cards, of course, is the power required to keep them running, and often, either the card itself is gimped or the battery life is drained fast. The GTX 580M features what Nvidia calls "Optimus technology", which is a new line of laptops can last extra long hours on battery life without needing to charge.

If that weren't enough, the card supports stereoscopic 3D gaming with NVidia's 3D Vision, which supports over 500 games. The laptop can even connect to a 3DTV uding the NVidia 3DTV Play option.

This tech doesn't come cheap, of course. The prices range from $1572 to $2361. Acknowledging this, Alienware has thoughtfully announced a plan to allow customers to send in their M18x laptops to be refitted with the new NVidia graphics card for a far lower price.

The bullet-point feature list for the NVideo GTX 580M includes:

• NVIDIA SLI® technology, which links two GTX GPUs for up to double your gaming performance.

• Support for NVIDIA 3D Vision™ technology, the #1 3D experience for notebooks, which automatically converts over 525 titles into immersive 3D.

• NVIDIA Optimus technology, which enables extra-long battery life by automatically switching on and off the GPU so that it runs only when needed.

For gamers who want desktop-like performances on their laptop, this is what they've been looking for.