30 March 2011 | By APZonerunner
WWE All Stars is intended as something of a return to the style of wrestling game that used to grace Arcades in the 90s, and so the guys at Mad Catz saw an ample opportunity to create some arcade-style accessories for those who really want the authentic throwback wrestling experience at home.

Those accessories are the WWE BrawlStick and BrawlPad, and both are based loosely on technology used in the Mad Catz range of Street Fighter IV accessories with some WWE-themed tweaks. 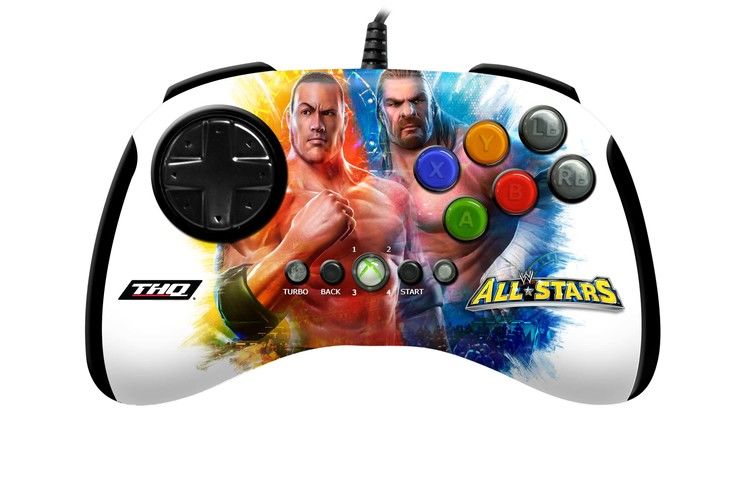 The BrawlStick is the thing that has changed the most from its Street Fighter equivalent, a fully-featured Arcade FightStick with a ball-top joystick and eight face buttons that represent the four face buttons and the four triggers that are on the regular PS3 and 360 controllers.

The shape of this stick is almost entirely identical to the cheaper Street Fighter IV Arcade Stick that was released around the same time as that game. Mad Catz put out a regular stick and a ‘Tournament’ version, and this shares its case and design with the former. While the outside is identical, the inside has been significantly changed from the Street Fighter IV sticks to mark the years of improvement in the tech Mad Catz use.

While this is all a little technical, the difference is that the PCB and much of the stick internals have been greatly improved, the hardware inside revised to take more of a beating and to last longer even under worse stress.

Those familiar with the original Street Fighter sticks will recognize that the buttons feel sharper and more responsive when in-game and the stick itself feels tighter and springier than the sticks on the original sticks. These changes were also evident in the Wii FightStick that was released for Tatsunoko vs. Capcom.

The first, and most obvious WWE-related change to the stick is the artwork, which features Triple-H and the Rock on the face in the stylistic art style of All Stars. The print is vibrant, colourful, and has a great glossy finish, which means it shouldn’t start looking worse for wear after a fair bit of use.

A handy addition to the stick is the fact that it comes already configured for use with WWE All Stars. Unlike with some games and some sticks you won’t have to enter a control configuration menu and tell the game where you want the buttons mapped – just plug the stick into your console and you’re ready to go with no lengthy options to set up.

The stick also comes packed with a dual-speed turbo button, which lets you set the stick up to automatically hammer on any of the buttons for you, and has the now-traditional placement of Start and Select on the rear of the stick to stop you from accidentally pressing them. Those buttons can also be locked out entirely with the flick of a switch. 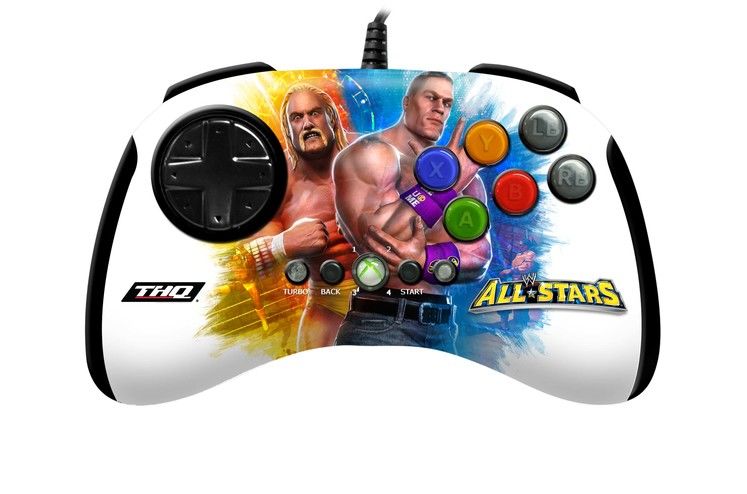 The stick itself can be switched to input as the D-Pad, Left Stick or Right Stick, meaning the stick is suitable for multiple games past WWE All Stars, too – but the real question isn’t about the build of this largely-familiar stick – it’s about how it performs in WWE All Stars.

The answer, put simply, is great. The stick is wired with a decent length cable and as mentioned earlier requires no setup to work in All Stars – so you can plug it straight in and go. The fast-paced nature of All Stars, which is covered in our review of the game, means that having all the function buttons placed in front of you is a real help in executing some of the moves.

WWE All Stars does a downright fantastic job of recreating the all-out fun feeling of old Arcade Wrestling games with few of the frills of modern Wrestlers, and having the control method to match is great. The buttons have a great spring to them that, while not as high quality as those in the Tournament Edition Street Fighter sticks, is certainly nothing to sniff at for the price this stick is on offer for.

The layout of the stick works really well for All Stars, with the stick itself and the buttons separated a decent distance apart and the stick has a slanted top to ensure it remains comfortable even after hours. Little touches like that make this a really worthwhile piece of kit.

We have to be clear that the BrawlStick, while much improved, is nowhere near the quality of the Tournament Edition Sticks that have been put out for Street Fighter and Marvel vs. Capcom, but this stick also clocks in way cheaper and is a perfect entrance option for those who’ve been sitting on the fence for a while – or for WWE fans who aren’t going to play the super-high execution fighters out there.

The BrawlPad is an identical piece of kit to the Super Street Fighter IV FightPads, which we already reviewed – though this time around they come in two WWE-themed varieties, featuring either Hulk Hogan and John Cena or The Rock and Triple-H.

The FightPads feature six face buttons and two triggers as well as a special kind of D-Pad for movement that Mad Catz has patented. The ‘floating’ D-Pad is soft and squishy and does a great job of emulating the precision an Arcade Stick offers while keeping the price and the real-estate that the controller takes up down – the BrawlPad is only around the size of a regular controller.

The BrawlPad has the same switcher for the D-Pad that the stick has – meaning the D-Pad’s input can be set to the Left Stick, Right Stick or the D-Pad on the original 360 and PS3 controllers. This also comes in handy for using the pad in other games. 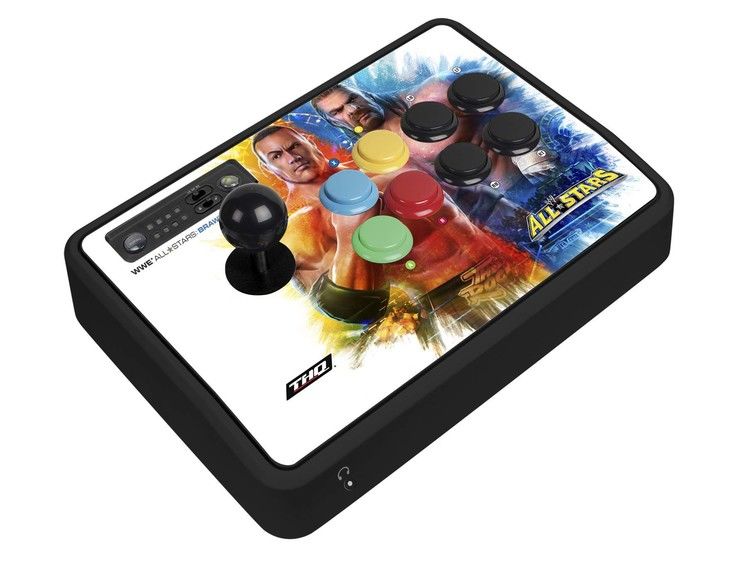 While I don’t feel it translated into the game quite as well as the BrawlStick did, the Pad certainly does a great job in All Stars and makes the game move a little smoother and sharper and feel a little more like the original arcade experience it’s trying to replicate than a regular controller does. You can find a more in-depth review of the Street Fighter pads through this link.

Both the FightPad and the BrawlPad are available now either online through the GameShark store, Mad Catz’ official online shop, or at other regular retailers on and offline.