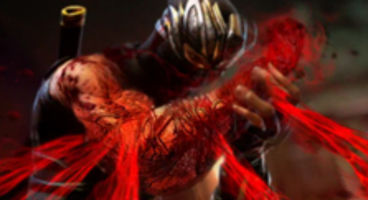 In our interview with Peter Garza, the overseas product manager says they've "done away with" the stereotypical game metaphors, opting for more immersion.

Instead they worked those metaphors "into the game world itself", like using Ryu's arm as his 'power-up gauge' instead of a meter. Going 'modern' is their focus.

"I think for ... at least since the first game in this new series - the first game nailed combat. The second one you had more splatter and visual 'coolness'... for Ninja Gaiden 3, there's been a concerted effort to make this more of a modern action game," said Garza.

"No resting on its laurels and doing things because that's how they've always been done. There's been a lot of work in trying to make it more immersive, to look at other modern games that are out there now, and to incorporate game design that are in other games."

One way of modernising their over-the-top antics is to infuse the more traditional power-up gauges into the game world, such as the main character's arm being 'cursed'.

"So, we've done away with essence, and dragon statues... very 'game-y' metaphors. In NG3 we're trying to be more immersive, and tried to work those metaphors into the game world itself to keep the player in the world," continued Garza.

"One example is the arm of the main character - if you've seen the trailer, you'll know that he's got something funny going on with his arm. That's actually a curse that's put on him very early in the game. The more people he kills, the more that curse flares up, and that's essentially how you power up. Instead of having a gauge, we've worked it into his body."

Where did they draw modern inspiration from for Ninja Gaiden III?

"I don't know if there's one specific franchise, but I can say that if you look at a lot of western games right now there are more immersive experiences. Whether it's looking at Heavy Rain, or Battlefield... it's all this seamless, immersive experience," he replied.

"Even Assassins Creed has its own metaphors for what it does... that's the kind of ideas, the kind of game design we're looking that." Check out our full interview with Peter Garza.