Sly Cooper all over this week's US PlayStation Store update, Voltron demo out 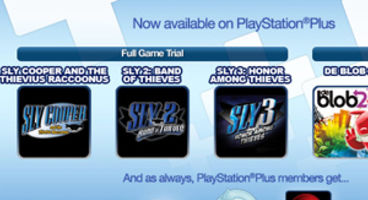 The Sly Collection Bundle is almost certainly the highlight of this week's US PlayStation Store update as Sly Cooper and the Thievius Raccoonus, Sly 2 and Sly 3 release on PSN.

Also now out for US PS3 gamers is Voltron: Defender Of The Universe, and de Blob 2 is now fully downloadable. There's $20 off inFamous 2 from now on, bringing it down to $39.99.

Darkstalkers is available as a PSone Classic, with Tak 2 Staff Of Dreams a PS2 Classic. You can now also download Call Of Duty: Modern Warfare 2 as a digital PSN title if you wish.

Sly Cooper and the Thievius Raccoonus

Sly Cooper and the Thievius Raccoonus ($9.99)

Sly Cooper and the Thievius Raccoonus is a remastered HD version of the original Sly Cooper game on PS2 system! Now you can play the classic thieving adventure all over again on the PS3 system. Guide Sly through rooftop chases and evade security guards,d odge spotlights, alarms and infrared lasers.

Sly and the Gang are back! And they’re ready to pull off the biggest job of their lives yet! Journey around the world and beat the Klaw gang at their own game. Sly 2: Band of Thieves has been remastered in HD for a brand new experience on the PS3 system!

The Thieving Gang Returns for their Greatest Heist Ever! Now Remastered in HD for the PS3 system! Your favorite characters return from Sly 2 as well as new playable specialists like Carmelita Fox and the Guru.

From days of long ago, from uncharted regions of the universe, comes a legend. The Legend of Voltron. Defender of the Universe. A mighty robot, loved by good, feared by evil. Take control of your favorite Lion and join forces on PlayStation Network with up to four of your friends to defend the Far Universe.

Scene It? Movie Night is your ticket to an exciting movie trivia showdown! Show off your cinematic know-how with friends and family through 14 brain-twisting puzzles, and prove you’ve got what it takes in a fast-and-furious multiplayer climax.

The Sly Collection contains all 3 remastered Sly Cooper games from the PS2 system in HD! Relive the adventures of Sly and the Gang – all 3 games can also be played in 3D.

Download and play the multiple Game of the Year award-winner Call of Duty: Modern Warfare 2. Experience gripping and heart-racing action as you face off against a new threat dedicated to bringing the world to the brink of collapse.

In de Blob 2 Comrade Black and the Inkies are back with a whole new plot to rid the world of color. With all new help from Papa Blanc and his flock of followers the Blancs, Blob and his friends will have their work cut out for them bringing color back to the citizens of Prisma City.

Voltron: Defender Of The Universe Demo

From days of long ago, from uncharted regions of the universe, comes a legend. The Legend of Voltron. Defender of the Universe. A mighty robot, loved by good, feared by evil. Take control of your favorite Lion and join forces on PlayStation Network with up to four of your friends to defend the Far Universe. Visit iconic locales from the classic series. Form Voltron to battle gigantic Robeasts and put an end to the threat from King Zarkon.

The best thing about Sackboy is that you can make him look and act exactly how you want. Download this additional costume to really stand out from the crowd! To download this costume, you must already own LittleBigPlanet 2.

Enhance your NBA 2K12 experience with the all-new “Legends Showcase” add-on content pack. Legends Showcase delivers hours of additional gameplay, allowing users to END THE DEBATE as to who is the best player ever. Set in a stylized version of Times Square, Legends Showcase allows players to select from over 150 legends to compete in 2v2 and 3v3 Challenges, H-O-R-S-E, Pick-Up games, and more.

Why of course there is an underground military base on the island! Unfortunately the zombies found it first. Fortunately, the military left test weapons, toxic waste, and lots of other nasty stuff laying around when they abandoned it.

Free character for ELEVATOR ACTION DELUXE owners! Reika from TIME GAL. Use her cute outfits to distract and defeat your enemies!

Summer clothes for Pang De, Guo Jia and Wang Yi are included in this pack.

The following weapons are included in this pack: Beast’s Bite, Scepter of Kings, Hell’s Scepter, Shadow Slicer and Flame Shredder.

Rocksmith – I Hate Everything About You By Three Days Grace ($2.99)

•Roadrunner Records Pack ($5.49) – Build your Rock Band library by purchasing this song game album: Roadrunners Records Pack. This pack includes “On the Backs of Angels” by Dream Theater, “Ghost of Perdition” by Opeth and “In Waves” by Trivium.

Bioshock Infinite – Behind The Scenes Part 1

Bioshock Infinite – Behind The Scenes Part 2

Ten Darkstalkers battle for domination of the night in this popular fighter.

Tak is back! It’s time to bravely venture outside the pupanunu tribe and discover adventure!