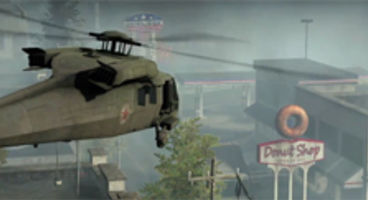 THQ and Kaos Studios are showing love for the PC crowd by cramming in some specific features for Homefront on desktops, like extra heli controls.

All vehicles can be viewed in third or first-person, and we can enter 'Practice Mode' to master our control of them. LAN support, dedicated servers...

"The team at Digital Extremes has been working hard with Kaos Studios in order to deliver the best possible experience and tailor many aspects of Multiplayer specifically to the core PC audience," said Kaos Studios in their Homefront blog post.

We thought long and hard about the additional features the PC community would appreciate and expect.

From a gameplay standpoint, we’ve done some additional work on the vehicles. On PC, you’ll be able to control all vehicles from the 1st person cockpit viewpoint as well as 3rd person. We also added additional control options for helicopters, to give those players looking for more sim-like controls something to get their teeth round. There are three settings:

o Ace: Allows for the best maneuverability, but takes the most practice to master.

We’ve included a Practice Mode so you can get to grips with vehicle controls outside the pressures of a live match. No need in wasting your hard earned Battle Points!

Lastly, we added some extra vehicle abilities for co-pilots, such as a Recon function to the Scout heli, and we obviously support joystick control for all vehicles.

In terms of other gameplay changes - we introduced a Squad Management system for PC, with Squad based VOIP. We also offer Clan Support on PC, and we’ll be tracking more post-match statistics on the PC platform. As stated above, we’re a Steamworks title and we use Valve Anti-Cheat to counter cheaters.

We also feature Multiplayer Match Recording (check out the podcast for more info), and we’ll be releasing a Dedicated Server Browser Executable to allow you set your own private Homefront servers within 2 weeks of launch. LAN support in there as well!

Finally, a few tweaks you’d expect as standard - we optimized the UI to make it more PC / Mouse friendly. We support SLI / Crossfire configurations for extra performance, and we support 3D through NVidia’s 3D Vision if you have the appropriate hardware.

They also offered a lengthy FAQ for PC Homefront which you should check out. Homefront releases on Xbox 360, PS3 and PC March 11th.