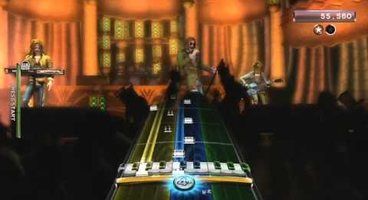 An update is now available for the Xbox 360 version of Rock Band 3, which should be dropping on the PlayStation 3 version in the next 24 hours. The patch fixes, among other things, a "deadly" eyebrow asset, sound fixing, and an anti-cheating measure that defeats a pause scoring exploit.

The audio distortion (also referred to as a buzz, hiss, or squawk) that some PS3 Keyboard players experienced has been addressed.

For users experiencing trouble deploying Vocal Overdrive in certain audio setups, OD can now be deployed using the Back button on the controller. NOTE: this only works while in a valid Overdrive deploy section.

Overdrive can now be deployed using a Pedal with both the Mustang Pro Guitar and the Keyboard peripherals.

Scoring is disabled after a song has been paused multiple times (this prevent players from artificially inflating scores using the pause function).

The translucency of the track surface has been adjusted to make note gems are easier to see against the venue backgrounds.

Based on fan feedback, limited functionality for the Stage kit has been added to Rock Band 3. Please note that this 3rd-party peripheral is no longer officially supported, so we cannot guarantee full functionality with every file format (RB3, Pro-DLC), but basic functions should be reenabled.

PS3 Voice Chat not properly working with headsets has been remedied.

Audio no longer distorts for remote players when whammying sustains in an online session.

Pro upgrade availability will now be more accurately reflected in the Music Store.

The following songs are now correctly appearing in the Music Library.

Anvil - This is Thirteen

Dinosaur Jr - Pick Me Up

Guess Who, The - Hand Me Down World

Guess Who, The - No Time

Fixed a Character Creator crash related to a particular eyebrow asset or the generation of a random character.