01 November 2012 | By Jonah A. Falcon
Jagex Games Studio, best known for RuneScape, has officially confirmed their next title, Ace of Spades, which will be a free-to-play online shooter with a distinctive Minecraft block building mechanic.

The game had been playable as a prototype, which has been downloaded over 2.5M times. This incarnation will be a beefed up version that supports 32 player multiplayer and objective-based missions.

As with Minecraft, there will be a "build anything" mechanic allowing players to customize levels both before and during combat.

The game is due to be released sometime in December 2012. Check out the gameplay video below. 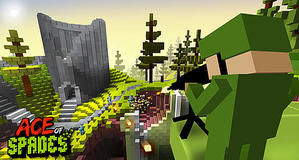