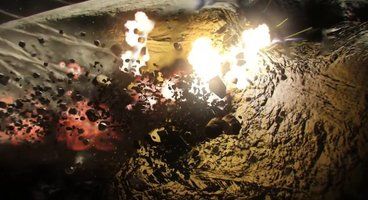 The intriguing sci-fi real-time strategy game BlackSpace, which is being developed by indie developer PixelFoundry, has been raising funds via Kickstarter.

BlackSpace is set apart not only by its unique monochromatic outerspace setting, but by its robust physics and destructible environment engine. According to PixelFoundry: "Pretty much anything can be destroyed and harvested. The entire ground can be demolished down to the super dense core. Old wreckage, derelict mining bases, even your own demolished structures break apart and can be reclaimed."

Physics can be weaponized, "to crush your enemies, smash them into one another or into the ground...or...if you're feeling primitive, drop a big rock on them. You can even test your trajectory skills and try to send them into orbit."

Gamers interested in checking out the RTS can visit the Kickstarter page here.