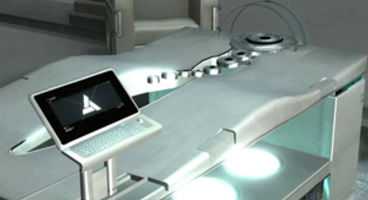 Ubisoft introduced multiplayer to the Assassin's Creed franchise with Brotherhood, which entered into the fray as a Templar training program at Abstergo. It began it's very own story thread.

This continued in AC: Revelations and will continue again with Assassin's Creed 3, allowing for persistent online profiles carrying over. Lore about the secretive company is drip feed.

As players rise in rank little snippets of data are unlocked to give fans insight into the Templar operations going on. It integrates with what's happening with Desmond's story.

It's clever way for Ubisoft to let gamers see the otherside of the 'great war' between Templar and Assassin, with the team always looking to improve how agents are trained through new modes. A lot of advancements have been made with Assassin's Creed 3 thanks to the new beefed up engine, and that will spill into online play.

"The multiplayer is so big today that it's already a game on its own. We've been given the right to develop the Abstergo storyline since the beginning, which is a big responsibility," said game director Damien Kieken of Ubisoft Annecy. "As you progress in the game and level up your character, you access these files and videos. Every month you'll have new challenges to unlock new content that will continue the storyline throughout the year."

Weather affects gameplay for Connor in AC3 but will come along in multiplayer too.

"The dynamic weather system is a perfect example of one the things we've done," said Keiken. "Now in the multiplayer maps, a snow storm or heavy rain can seriously affect your visibility, making it harder to spot the other players."

Wolfpack features players hunting AI targets in teams of 2-4 against time. One way Ubisoft Annecy worked to keep this from going stale is still make sure not all targets behave the same. "Some are cowards and will try to run away when they spot you, others are fighters and will stun you and run away. Some are almost blind; others will spot you quickly when you're on their tail," explained the game director.