Connor's time to rise is here...

With December signalling the end of the year, it's about time for Ubisoft's anniversary celebrations to wind down.

Present-day "is coming back" with Assassin's Creed Syndicate, player to 'have importance' in events

One of the criticisms of the Assassin's Creed series has been its trips into the present-day tug-of-war between the Assassins and Templar. With the 'Desmond cycle' truly over it's time to get back to it, says Ubisoft.

Assassin's Creed Syndicate will be reintroducing the player to present-day scheming between the groups, and it's "going to make sense" for those following it. They're focusing on making us a central influence to events.

Assassin's Creed Rogue for PC rated by German body, due out "early 2015"

It was originally announced as only for Xbox 360 and PS3, with rather vague shrugs from Ubisoft as to whether it would also hit desktops. New trailers confirm it's out on PC "early 2015". 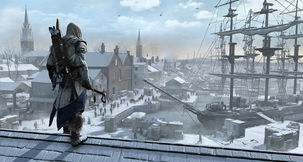