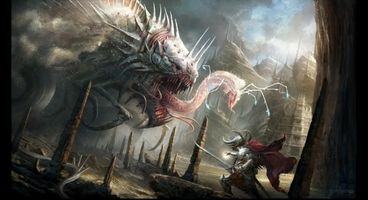 Funcom has announced a new expansion for their free-to-play MMO Age of Conan, called Secrets of Dragon's Spine. The expansion is unique in that rather than have one large release, there will be multiple updates over time starting in a few months.

Secrets of Dragon's Spine, as one might expect, opens up a new region called The Dragon's Spine, which is located in a desert area southwest of the ancient city of Piteion.

"Rippling desert dunes stretches for miles in every direction from the spine, lifeless, except for a small oasis in the mountain’s shadow, and treacherous caves and tunnels weave in and out of the mountain rock," describes the press release, "The only building made by man is the Palace of Cetriss, which can be found in the center of the area, at the foot of the mountain."

For starters, the area, which is aimed at level 80 players, will include several new dungeons, which include The Coils of Ubah Kan, The Sepulchral of the Wyrm and The Slithering Chaos. The Dragon's Spine will also feature a new raid area, a massive outdoor region, and a new PvP area, as well as a host of new rewards, armor sets, weapons and other cultural items.

Gamers interested in more info about the expansion can read about it here.