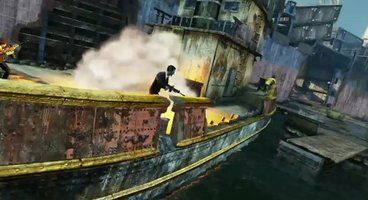 Uncharted 3: Drake's Deception season pass offer Fortune Hunters' Club will be expiring on the 17th April, and the final downloadable content pack that it covers will be released next week on the 11th April.

The final Fortune Hunters' Club DLC will include four new Uncharted 3 maps, including the Graveyard map, the Old Quarter map, the London Streets map and the Oasis map. According to developer Naughty Dog community strategist Eric Monacelli, all of the maps will feature dynamic events.

"A patrol boat will circle the border of Graveyard launching grenades over the map as it cruises along its path. In Oasis, a plane drops a shipping crate that can flatten you or your enemy if you don't move out of its way in time. The crate contains a power weapon if you're smart enough to stay out of the crate's shadow. London Street and Old Quarter contain dynamic events as well but we want to leave you a couple big surprises now don't we?", Monacelli teased.

While the Fortune Hunters' Club will expire on the 17th April, Naughty Dog says that won't be the last of the DLC being released for Uncharted 3.

"For starters, for those of you itching for new play types and experimental modes, The Lab will make its return to Uncharted multiplayer," Monacelli stated. "We'll be talking with and polling you in our forums about various potential ideas we have for the future of Uncharted 3 multiplayer so be sure to join in our community and voice your opinion."